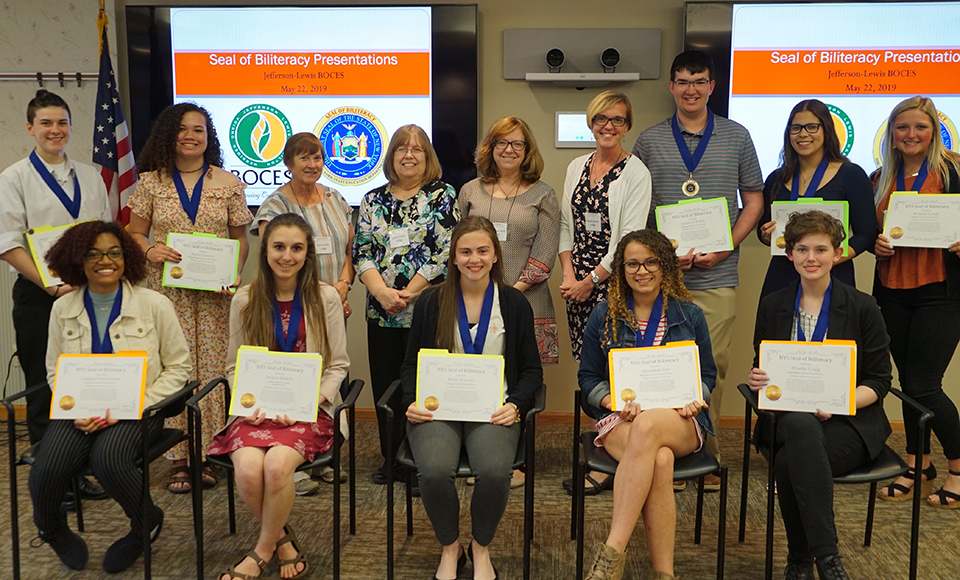 Eleven local high school seniors have demonstrated their proficiency in communicating in a second language and have earned the New York State Seal of Biliteracy following a program that was held May 22, 2019 at Jefferson-Lewis BOCES.

Earning the Seal of Biliteracy in 2019 were Arianna Robertson and Alexys Gayne of South Jefferson; Jessica Rebelo and Reina Guerriero of General Brown; Brooke Craig of Copenhagen; Madeline Gist of Watertown; and Reagan Lundy, LeLan O’Brien, Katie Huestis, Kane Gravelle and Tianna Parchment of Carthage.  All eleven students have been supported by their World Language instructors and mentors throughout the school year to complete projects in reading, writing, listening and speaking.  The hard work culminated with the presentation shared at the regional event held at Jefferson-Lewis BOCES.

The event highlighted each student’s final presentation before a panel of five judges focusing on what he or she has learned culturally during the course of the project, all while presenting in the second language which has been studied during the high school years. Students earning the Seal of Biliteracy received a medal and a sash which can be worn as a distinction during his or her respective high school graduations.  In addition, a Seal of Biliteracy will be placed on each student’s high school diploma.